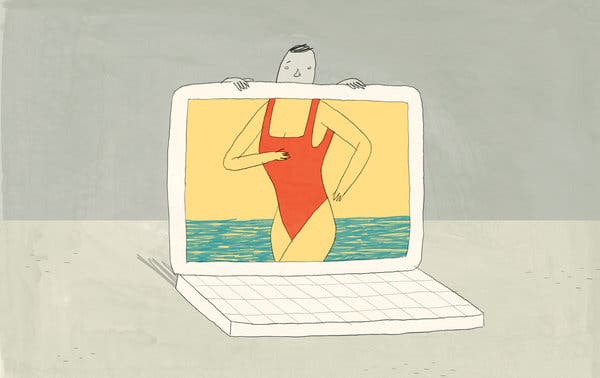 More than a decade ago, when I was growing up in Finland, my model of an attractive woman was Pamela Anderson from “Baywatch.” She was my father’s favorite. Whenever the boys at school asked me who I Googled when my parents weren’t home, I said, “Pamela,” and the name was greeted with a unanimous nodding of heads.

I didn’t care much for her nude shots, but I liked that she was of Finnish heritage.

My nonsexual feelings for Pamela were just one of the things that made me an outcast. Another was that I preferred computers to people. And so, as a child who loved playing board games, I soon discovered I could play them online with strangers on a Finnish gaming website.

To access the site, you typed your user name in the blank field, waited for a slot to open and then found yourself in the main chat room, where you could challenge people to a round of blackjack, keno or billiards. Except it seemed no one else was there to play those games seriously. The screen was a constant stream of dirty messages.

I realized no one wanted to message with a boy in his early adolescence, but many were clamoring to chat with an attractive woman. And that’s where Pamela came in. To interest fellow gamers, I needed to become a woman.

Using Pamela’s age and some of her defining features to create my new persona, I logged in to the chat room as “CharlottaDD35.” Then the messages came pouring in.

I accepted an invitation to play billiards from Jarkko25. A screen popped up, and we were escorted to a private room, where a question from him appeared in the message box: “Are you feeling frisky?”

I didn’t entirely understand what he meant, but I knew it was dirty.

I waited a moment and then wrote, “Yes.”

I quickly Googled “Pamela+Anderson” and described what I saw in the search results: “179 cm, blonde. I like to wear heels and tight dresses.”

“Mmmh. Do you have big breasts?”

“Yes.” I was determined to give him everything he wanted.

“What sort of men do you like?” he asked.

Thinking of James Bond movies, I said: “Someone like Pierce Brosnan. Someone who takes charge. Someone stylish.”

“I can definitely take charge,” he said.

I took a sip of my Kool-Aid. “Six-pack?” I asked. Now was the time for me to be demanding; otherwise it wouldn’t seem real. Having a six-pack was a thing I’d heard was desirable.

I laughed. Maybe this guy was nice.

What followed was my first-ever cybersex session, with him typing suggestive remarks and me typing, “Mmmh,” which seemed to work for him.

My masquerade went on for months. I became a master of giving men what they wanted. The sheer number of interested men meant I could be picky, too. I wanted a conventionally handsome and sexy young man. And since I was a woman of such high caliber, I didn’t think it was too much to ask.

I tailored my story to suit the other participants’ interests. I was married with two children. I had a rich husband who couldn’t satisfy me sexually. We lived in an enormous glass house with a private beach in one of Helsinki’s most exclusive suburbs. And since I was a bored, lonely housewife, I always needed someone to come over and take care of things.

I found amateur photos of naked women online to send to the men and patched up whatever incongruities emerged: “The picture doesn’t have a face because I don’t want my husband to find out I’ve been posting my photos online” or “I never give my number to strangers until I’ve gotten to know them well enough.”

The back story also allowed me an escape in case my parents got home. “My husband just walked in, so I have to go now,” I would say. “Can’t wait to talk to you soon.”

I liked this online seduction much more than I imagined I would. I told myself it was the danger: of getting caught, of fooling the men, of breaking rules. Whatever the case, I’d become addicted. Every day after school, I would continue my quest for the perfect man.

That’s when I came across Jussi. He described himself as a man who was 23, loved the gym and had a six-pack. He played ice hockey and basketball, masculine sports I’d always wanted to be good at. But he was emotive too. He sent me messages such as, “You sound like an incredible woman” and “I can sense such warmth in these messages of yours.”

He asked me the usual questions: What are you wearing? Where do you like to do it? How do you like it?

I provided my usual answers: I was wearing nothing (“I just got out of the shower and like to cool my body naturally”). I liked doing it on every surface of the house and particularly in public places. All the yoga I did made me incredibly flexible, and I loved being lifted up and twisted into adventurous sexual positions.

But then he began to talk about what he hoped to find on the site: namely, a relationship that was real and meaningful. I agreed I was tired of sleeping around too. Usually I blocked a man once he began to insist on meeting in person, but Jussi was patient and sweet. I wanted to continue talking to him.

We logged in at the same time, day after day. I adjusted the schedule around my school days by saying, “I’ll need to drop off the kids first, so I won’t be home until 3 p.m. tomorrow.” He worked night shifts as a security guard, so he was always online when I needed him to be.

After a few weeks, he said: “Can we meet already? Please Charlotta.” He told me that he was tired of chatting and that if I didn’t say yes, he wouldn’t believe I was a real person.

What we had was real to me, and I didn’t want to disappoint him. So I agreed.

We set a date for 7 p.m. a week later. We agreed to meet on a street corner in the center of Helsinki, mere blocks from where I lived. I hoped we would recognize each other simply because we had been talking for so long and had such a strong connection.

As the days passed, however, the impossibility of it began to dawn on me. Even if I were to go meet him and get past the initial explanations, I could never become what he imagined me to be. And something else dawned on me as well: I was starting to realize I might be gay, and that’s why I was different from everyone else.

At 7 p.m. that evening, my mother put sausages and French fries on the table for dinner. I sat in silence, answering her questions with an absent-minded yes or no. Looking at the clock, it hit me: Jussi was now standing out in the cold night, alone.

I wondered how long he would wait: Twenty minutes? Thirty? A full hour? Would he camp out at a nearby cafe while wistfully looking out of the window, searching the passing crowd for Charlotta’s face?

I imagined him sitting on the bus on his way home to the suburbs, hoping there’d been a mix-up: I’d either forgotten the day or mistaken the time. I imagined him logging on to the chat room and scanning the list for my user name, only to come up empty: I’d blocked him to make sure I didn’t have to read through any excruciating messages.

A couple of hours after dinner, my mother came to knock on my door to tell me it was bedtime. As I lay alone in the dark, I felt the same loneliness Jussi must have been feeling.

By pretending to be someone I was not, I had shown him my true self, one I had been too afraid to reveal to anyone else. And ultimately, I was able to embrace that true self, an acceptance that would allow me — years later, as an adult in New York City — to find real love as a real person.

To hear Modern Love: The Podcast, subscribe on iTunes or Google Play Music.